Soft silvery-white metallic element belonging to group 1 of the periodic table. One of the three metals which are liquid at room temperature. Cs-133 is the natural, and only stable, isotope. Fifteen other radioisotopes exist. Caesium reacts explosively with cold water, and ice at temperatures above 157K. Caesium hydroxide is the strongest base known. Caesium is the most electropositive, most alkaline and has the least ionization potential of all the elements. Known uses include the basis of atomic clocks, catalyst for the hydrogenation of some organic compounds, and in photoelectric cells. Caesium was discovered by Gustav Kirchoff and Robert Bunsen in Germany in 1860 spectroscopically. Its identification was based upon the bright blue lines in its spectrum. The name comes from the latin word caesius, which means sky blue. Caesium should be considered highly toxic. Some of the radioisotopes are even more toxic. 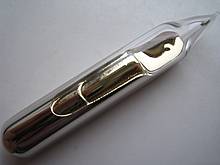 Robert Bunsen and Gustav Kirchhoff were the first to suggest finding cesium in 1860 by spectrum analysis. They discovered cesium by its two blue emission lines in a sample of Dürkheim mineral water. The pure metal was eventually isolated by the German chemist Carl Setterberg while working on his doctorate with Kekulé and Bunsen. From the Latin word caesius, sky blue

The radioactive isotope cesium-137 has a half-life of about 30 years and is used in medical applications, industrial gauges, and hydrology. Cesium is also used in photoelectric cells and as a catalyst in the hydrogenation of organic compounds. Cesium vapor thermionic generators are low-power devices that convert heat energy to electrical energy. Used as a 'getter' to remove air traces in vacuum and cathode-ray tubes. Also used in producing photoelectric devices and atomic clocks. Since it ionizes readily, it is used as an ion rocket motor propellant.