Relatively soft and malleable silvery-white metallic element, which is stable in dry air at room temperature. It oxidizes in moist air and at high temperatures. It belongs to the lanthanoids. A rare-earth metal, it is found in the minerals monazite and gadolinite. It possesses unusual magnetic properties. One natural isotope, Ho-165 exists, six radioisotopes exist, the most stable being Ho-163 with a half-life of 4570 years. Holmium is used in some metal alloys, it is also said to stimulate the metabolism. Discovered by Per Theodor Cleve and J.L. Soret in Switzerland in 1879. The name homium comes from the Greek word Holmia which means Sweden. While all holmium compounds should be considered highly toxic, initial evidence seems to indicate that they do not pose much danger. The metal's dust however, is a fire hazard. 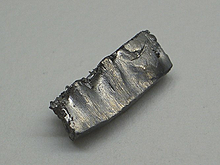 Holmium was discovered by Swiss chemists Marc Delafontaine and Jacques-Louis Soret in 1878. They noticed the aberrant spectrographic absorption bands of the then-unknown element. Later in 1878, Per Teodor Cleve independently discovered the element while he was working on erbia earth. From the Latin word Holmia meaning Stockholm

Holmium is used to create the strongest artificially generated magnetic fields, when placed within high-strength magnets as a magnetic pole piece. It is one of the colorants used for cubic zirconia and glass, providing yellow or red coloring. Holmium isotopes are good neutron absorbers and are used in nuclear reactor control rods. It has very few practical applications; however, it has some unusual magnetic properties that offer some hope for future applications.

Occurs in gadolinite. Most often from monazite which is often 50% rare earth and typically 0.05% holmium.