A colourless, odourless gaseous element belonging to group 16 of the periodic table. It is the most abundant element present in the earth's crust. It also makes up 20.8% of the Earth's atmosphere. For industrial purposes, it is separated from liquid air by fractional distillation. It is used in high temperature welding, and in breathing. It commonly comes in the form of Oxygen, but is found as Ozone in the upper atmosphere. It was discovered by Priestley in 1774. 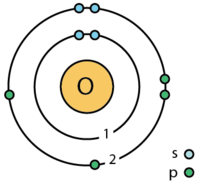 Carl Wilhelm Scheele obtained oxygen by heating mercuric oxide and nitrates in 1771, but did not publish his findings until 1777. Joseph Priestley also prepared this new air by 1774. The name oxygen was coined in 1777 by Antoine Lavoisier, whose experiments with oxygen helped to discredit the then-popular phlogiston theory of combustion and corrosion. From the Greek word oxys, acid, and genes, forming

Oxygen gas can be toxic at elevated partial pressures, leading to convulsions and other health problems
Green and red colors in the Aurora Borealis are caused by oxygen atoms

Pure oxygen is frequently used to help breathing in patients with respiratory ailments. Oxygen is used in oxyacetylene welding, as an oxidant for rocket fuel, and in methanol and ethylene oxide production. It is also used in the production of steel, plastics and textiles. Plants and animals rely on oxygen for respiration. Used in steel making, welding, and supporting life. Naturally occuring ozone (O3) in the upper atmosphere shields the earth from ultraviolet radiation.

Obtained primarily from liquid air by fractional distillation. Small amounts are made in the laboratory by electrolysis of water or heating potassium chlorate (KClO3) with manganese dioxide (MnO2) catalyst.