Radioactive metallic transuranic element, belongs to the actinoids. Ten known isotopes, most stable is Fm-257 with a half-life of 10 days. First identified by Albert Ghiorso and associates in the debris of the first hydrogen-bomb explosion in 1952. 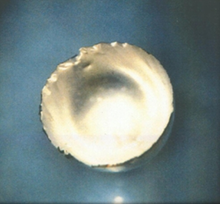 Fermium was discovered as a component of the debris of the first hydrogen bomb explosion in 1952. It was identified by Albert Ghiorso and co-workers at the University of California, Berkeley in collaboration with the Argonne and Los Alamos National Laboratories, in the fallout from the Ivy Mike nuclear test. The new element was produced by the nuclear fission of 17 neutrons with uranium-238. Named after Nobel laureate Enrico Fermi, one of the pioneers of nuclear physics

Fermium is used for scientific research purposes only. It has no significant commercial applications.