Soft silvery metallic element which belongs to the lanthanoids. Six natural isotopes that are stable. Twelve artificial isotopes are known. Used in nuclear technology as a neutron absorber. It is being investigated for other possible uses. Discovered by Carl G. Mosander in 1843. 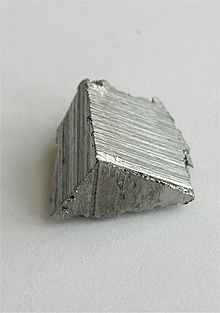 Erbium was discovered in 1843 by Swedish chemist Carl Gustaf Mosander, who detected it as an impurity in yttria. Using ammonium hydroxide he precipitated fractions of different basicity from yttria. In these fractions he found that the fraction that contained the pink color was erbium. Erbium was named after Ytterby, a town in Sweden

Erbium is used in photographic filters to absorb infrared light. Erbium oxide gives a pink color and has been used as a colorant in glasses and porcelain enamel glazes. It is also used in nuclear technology in neutron-absorbing control rods. Erbium is used in alloys especially with vanadium to decrease the hardness of metals. Erbium oxide is used in ceramics to obtain a pink glaze. Also a few uses in the nuclear industry and as an alloying agent for other exotic metals. For example, it increases the malleability of vanadium.

Found with other heavier rare earths in xenotime and euxerite.