Radioactive metallic transition element. Can be detected in some stars and the fission products of uranium. First made by Perrier and Segre by bombarding molybdenum with deutrons, giving them Tc-97. Tc-99 is the most stable isotope with a half-life of 2.6*10^6 years. Sixteen isotopes are known. Organic technetium compounds are used in bone imaging. Chemical properties are intermediate between rhenium and manganese. 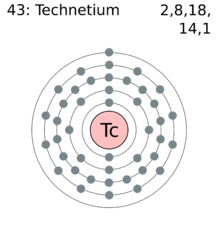 Element 43 was predicted on the basis of the periodic table, and was erroneously reported as having been discovered in 1925, at which time it was named masurium. The element was actually discovered by Carlo Perrier and Emilio Segrè in 1937. It was also found in a sample of molybdenum sent by Ernest Lawrence that was bombarded by deuterons in the Berkeley cyclotron. From the Greek word technetos, artificial

Technetium is used in nuclear medicine to carry out a number of medical tests, mainly relating to imaging and functional studies of internal bodily organs like bone scan. It is also used industrially for equipment calibration following its approval as a standard beta emitter. Mild carbon steels may be effectively protected by minute quantities of technetium, but this corrosion protection is limited to closed systems because of technetium's radioactivity. Added to iron in quantities as low as 55 part-per-million transforms the iron into a corrosion-resistant alloy.

Made first by bombarding molybdenum with deuterons (heavy hydrogen) in a cyclotron.