Silvery-white rare-earth metal which is relatively stable in air. It happens to be the most expensive rare-earth metal. Its found with almost all rare-earth metals, but is very difficult to separate from other elements. Least abundant of all natural elements. Used in metal alloys, and as a catalyst in various processes. There are two natural, stable isotopes, and seven radioisotopes, the most stable being Lu-174 with a half-life of 3.3 years. The separation of lutetium from Ytterbium was described by Georges Urbain in 1907. It was discovered at approximately the same time by Carl Auer von Welsbach. The name comes from the Greek word lutetia which means Paris. 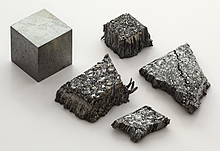 Lutetium oxide is used to make catalysts for cracking hydrocarbons in the petrochemical industry. Lutetium aluminum garnet has been proposed for use as a lens material in high refractive index immersion lithography. Lutetium is used as a phosphor in LED light bulbs. It has no practical applications.

Found with ytterbium in gadolinite and xenotime. Usually obtained from monazite sand which is ofter 50% rare earth by weight and 0.003% lutetium.