Silvery metalloid element of group 16. Eight natural isotopes, nine radioactive isotopes. Used in semiconductors and to a degree in some steels. Chemistry is similar to Sulphur. Discovered in 1782 by Franz Miller. 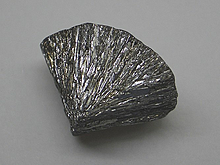 Tellurium was discovered in Transylvania in 1782 by Franz-Joseph Müller von Reichenstein in a mineral containing tellurium and gold. In 1789, another Hungarian scientist, Pál Kitaibel, also discovered the element independently in an ore from Deutsch-Pilsen which had been regarded as argentiferous molybdenite. In 1798, it was named by Martin Heinrich Klaproth who earlier isolated it from the mineral calaverite. From the Latin word tellus, earth

Tellurium and tellurium compounds are considered to be mildly toxic
In air, tellurium burns with a greenish-blue flames, forming the dioxide

The primary use of tellurium is in alloys, foremost in steel and copper to improve machinability. Tellurium is used as a basic ingredient in blasting caps, and is added to cast iron for chill control. It is used in vulcanizing rubber and in catalysts for petroleum cracking. Tellurium is used as a coloring agent in ceramics. Used to improve the machining quality of copper and stainless steel products and to color glass and ceramics. Also in thermoelectric devices. Some is used in the rubber industry and it is a basic ingredient in manufacturing blasting caps.

Obtained as a by-product of copper and lead refining.